For the duration of the hostilities, the work of the Representative Office in Ukraine is temporarily suspended!
ZOOGEN is out of politics, we sincerely sympathize with everyone unwittingly drawn into the conflict and wish it a speedy end! Peace to all!

If you cannot contact the Representative Office in Ukraine - call our phones, write to e-mail and social networks! We will definitely answer and help you!

Under any circumstances, the ZOOGEN Company confirms its obligations to carry out studies, as well as for the prepaid coupons sold, regardless of the political situation.

On the territory of the Russian Federation, all payments are made in rubles. 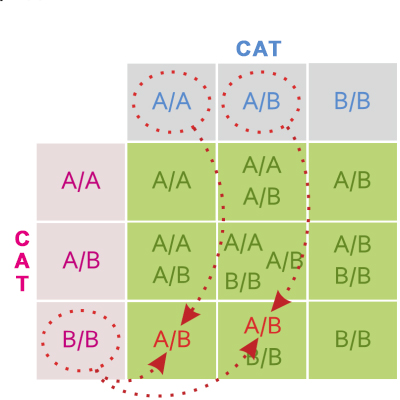 Unlike humans, dogs, horses and most other mammalian species, only one blood group system has been described for the domestic cat, which includes two main types - blood group A and blood group B , as well as a very rare blood group AB (blood groups are usually denoted in Latin letters).

Most cats are of blood type A , but there are a number of breeds in which type B is also common. For example, the frequency of occurrence of blood group B in British cats, Cornish and Devon Rex reaches from 25 to 50%, while it is extremely rare for Siamese and related breeds.

- when planning a mating.

Kittens born from a couple where the cat is blood type B , and the cat is A , may face a sad fate - "Sudden Kitten Death Syndrome". Kittens develop normally in the womb, but die soon after birth.

At first, the kitten's immune system is very weak, and the mother, along with the milk, transfers her antibodies to him, which are absorbed through the wall of the baby's intestines and enter his bloodstream. In case of incompatibility between the blood group of the cat and the kitten (the cat has blood group B , the kitten has A ), the mother's antibodies attack the kitten's erythrocytes, causing them to agglutinate, i.e. destruction. As a result, the baby develops anemia and metabolic disorders, which can lead to death.

In some cases, despite the incompatibility, kittens survive. This is due to the individual characteristics of the body, such as, for example, low absorption by the intestinal walls in the first days after birth.

Currently, a cat's blood type can be determined with a DNA test.

The following genetic nomenclature is used to denote blood groups:

Allele of blood group A is dominant in relation to alleles a ab and b, allele a ab dominates the allele b (A & gt; a ab & gt; b). The genetic test identifies cats with blood type B with two copies of the allele b and cats - carriers with only one copy of the allele b . In the second case, the animal may have blood group A or AB . Because the genetic test does not distinguish between A alleles and aab , it is customary to use the convention “ not B ” allele ( Non - B or just " N ")

By choosing the right pair, you can avoid the problem of hemolysis in the offspring. The table shows possible variants of kittens' genotypes depending on the genotypes of the parents.

Representative office in the Republic of Belarus

* Before going to the office, you must first call the staff of the Representative Office